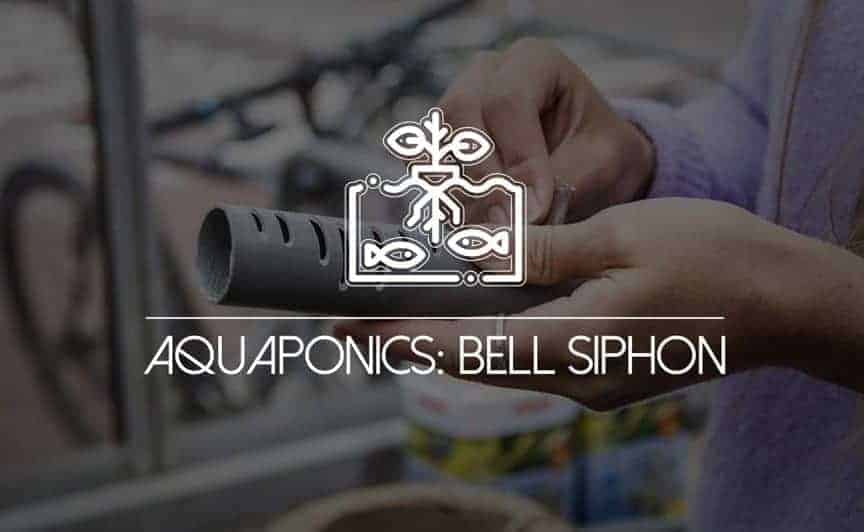 Those who are familiar with the mechanics of an aquaponics system understand the importance of the continuous rising and falling of the water levels.

This ebb and flow allows vital nutrients to be distributed throughout the entirety of the system, ensuring a healthy, functioning environment.

While electric-powered water pumps are a common and convenient way to enforce proper water circulation, they are not without their own disadvantages.

The bell siphon is a simple, physics-driven device that automates water flow in an aquaponics system without the need for electrical power.

With some precise calculating and the help of gravity, a bell siphon can completely automate the water cycle in an aquaponics system.

Smoky Mountain Aquaponics manufactures bell siphons for 4.5", 6", 8", 10", and 12" media beds. Trusted by aquaponics professionals and enthusiasts alike, these bells siphons are a reliable choice for you system. 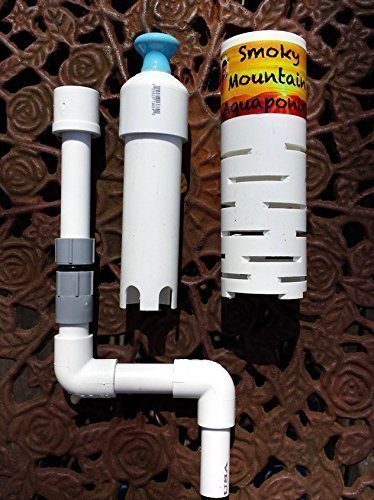 What is a Bell Siphon? 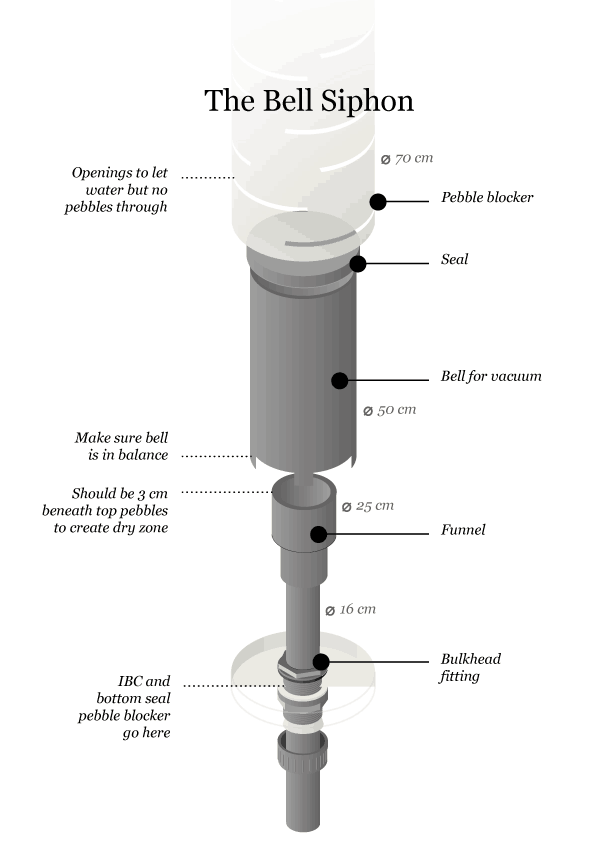 A Bell Siphon is a simple device used to regulate the flow of water in aquaponic and hydroponic systems easily and efficiently, with no need for human intervention.

The siphon first allows the grow bed to flood, then it automatically drains out the water when it reaches a certain level. The siphon also maintains a minimum water level as the excess water is drained.

How Does a Bell Siphon Work?

Bell siphons implement a very simple mechanism which leverages the forces of pressure and gravity. 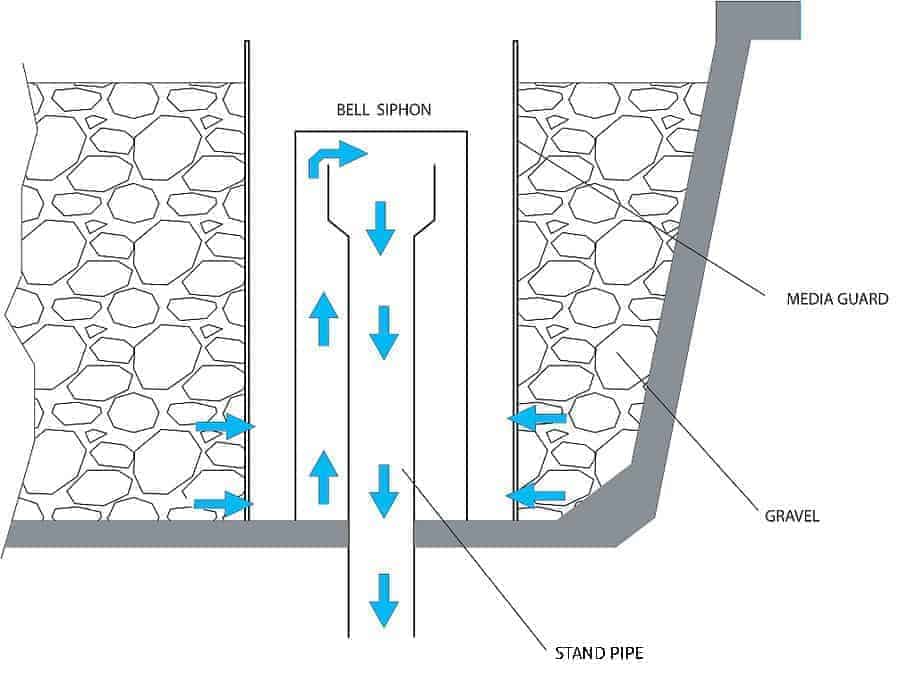 As the pump continues to run, water will keep pouring into the grow bed. Once the water level reaches the top of the stand pipe, the siphon is triggered again. This flood and drain cycle repeats indefinitely until the pump is stopped.

Read Our Related Article:
How to Understand pH Levels in Aquaponics

How is a Bell Siphon Beneficial for an Aquaponics System? 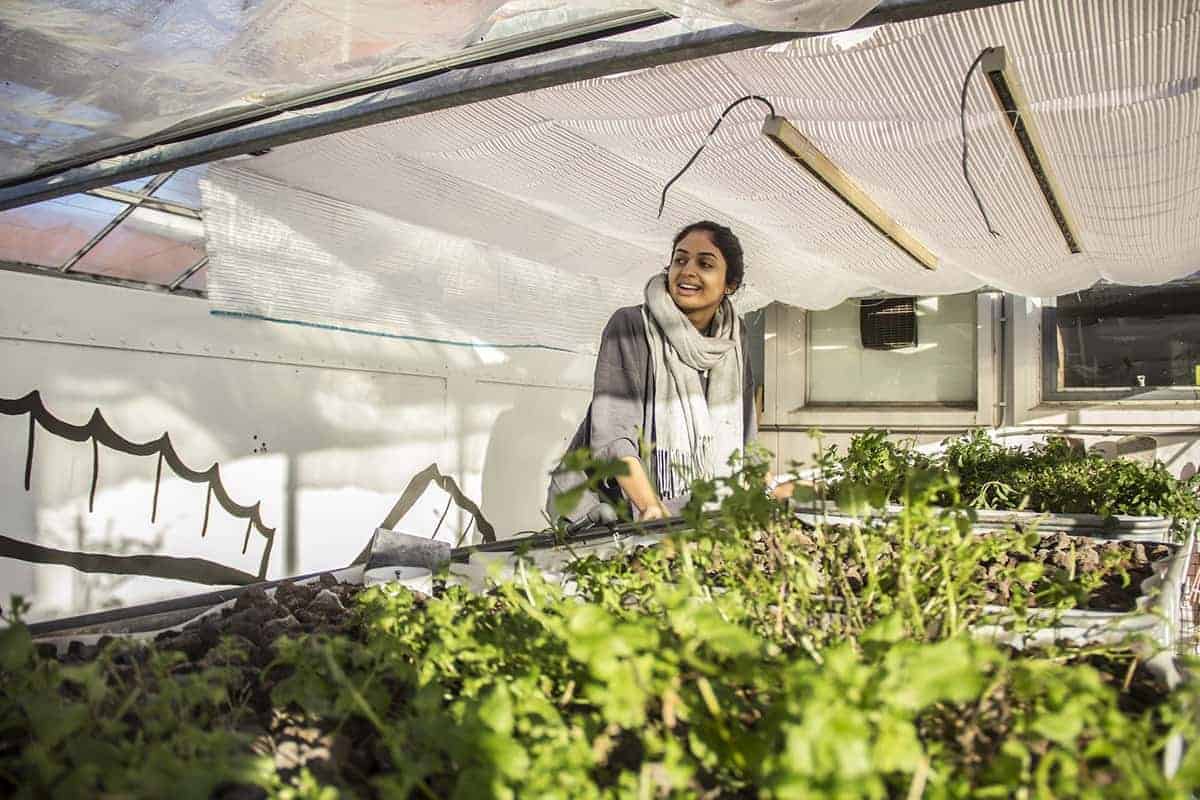 More Aeration for the Plants’ Roots

Using a bell siphon improves the oxygenation to the roots of the hydronic plants. As the bell siphon drains out water regularly, the full lengths of the roots are exposed to air regularly. This promotes oxygen intake, thus aiding in plant growth and the overall health of the plants. The indefinite flood and drain cycle allows the plants to remain hydrated and take in nutrients as well as oxygen for a balanced intake of required elements.

Constant and Consistent Movement of Water

Bell siphons allow for the constant and consistent movement of water out of and into the grow bed. This regular in and out flow of water improves the oxygen level of the water and prevents water stagnation which could attract bacteria, mold, mosquitoes, and rodents. The water flow improves support for the healthy growth of the plants.

The Process is Automatic

Bell siphons work automatically with the support of Physics concepts. This makes the process very efficient for the farmers. You would not need to manually drain the grow bed which saves a tremendous amount of time. There is no need for a timer and other additional drainage equipment, which also helps save costs.

Bell siphons enable your aquaponic system to function at maximum efficiency as the process takes place automatically. After trial and error, once you establish the optimum water pump flow rate, the bell siphon maintains a consistent flood and drain cycle with regular intervals.

Bell siphons are relatively easy to maintain. All you need to do is a little routine cleaning once in a while and some troubleshooting after installing. Bell siphons are also very easy to set up and they require no electricity 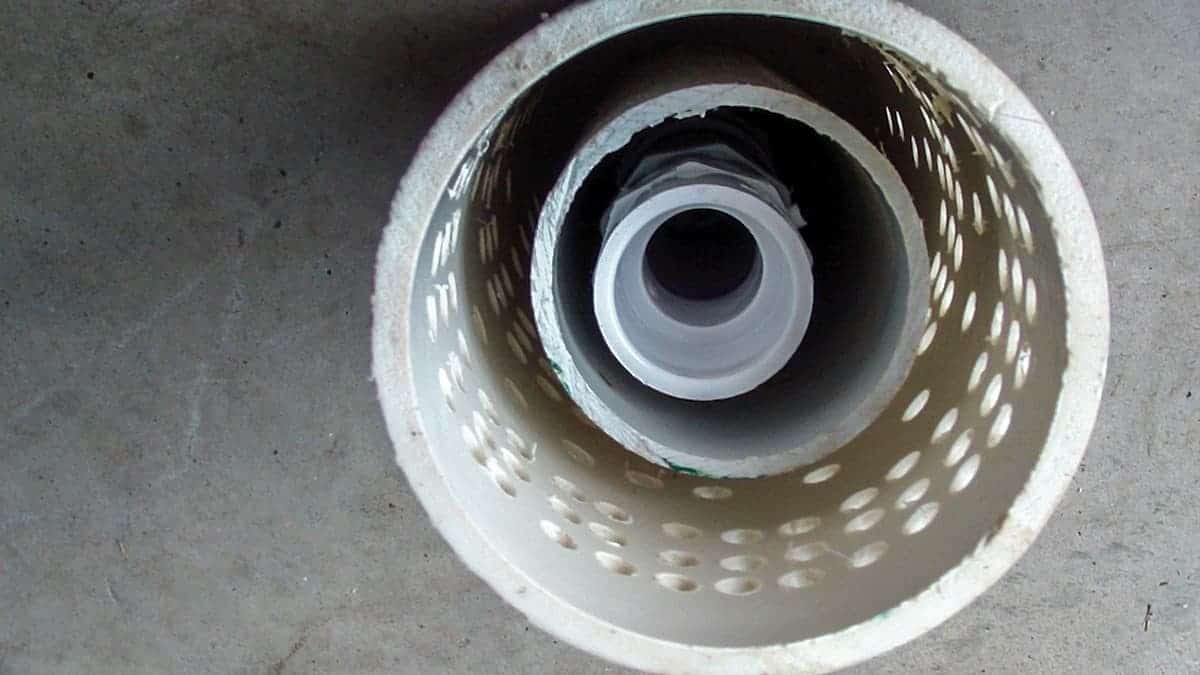 The bell cap plays a crucial role. As water overflows into the stand pipe, low pressure eventually builds under the bell cap which ends up forcing out water at a higher rate until air enters the bell when the water level reaches the slits at the base of the siphon pipe.

The siphon pipe creates a barrier between the siphon and the atmosphere, preventing air from entering inside. It allows the siphon to build up a negative pressure which then creates a vacuum that keeps water flowing in the siphon. The siphon pipe usually has slits at the bottom to allow air into the system, once the grow bed drains, to stop the siphon with the rise of pressure.

A good rule of thumb – the siphon pipe should have a diameter twice as big as the reducer.

The stand pipe is placed inside the siphon pipe and acts as the discharge pipe, regulating the maximum water level in the grow bed. It connects the bulkhead to the reducer. The water flows out through the stand pipe once it reaches the top of the stand pipe.

The media guard acts to keep rocks and other debris off the siphon pipe while allowing water to easily flow in and through the stand pipe. The guard prevents the support medium used in the grow bed from clogging the stand pipe and bell siphon.

The outlet pipe, or drain pipe, extends from the bottom of the bulkhead into the fish tank.

Watch this short animation explaining how a bell siphon works.

Read Also:
What Are the Best Types of Fish for Aquaponics?

Set Up and Installation

Follow the below steps to install your bell siphon.

Step 1 – Prepare the Ground with Your Tiles

Place your grow bed on the table and check to make sure that the bed leveled and stable.

Step 3 – Set up your Bell Siphon

Step 4 – Fill Up your Grow Bed

When you handle the cinders, there will be some black particulate. To rinse them, place the bell siphon over the stand pipe then continuously shoot the cinders placed in the grow bed from the top with a water hose. Let the water drain out via the bell siphon. You can stop shooting the water once you feel that the cinders are clean.

Make sure that the rinse water is not draining into the fish tank!

Step 6 – Complete the set up

Here is a brief outline of how to deal with the two most common issues faced with bell siphons.

The bell siphon will not trigger – the water level in the grow bed stays high and may overflow, but the water doesn’t flush

The bell siphon dumped the water, but the grow bed is not filling up again – the water in the grow bed remains at a low level and keeps flowing out of the drain pipe.

Remember to make sure that the drain pipe is not too long as it will create more resistance which will, in turn, affect the siphon.

What are the Best Bell Siphon Kits I Can Buy?

Smoky Mountain Aquaponics manufactures an excellent bell siphon constructed from various sizes of PVC pipe. Accommodating media sizes of 4.5", 6", 8", 10" and 12", these Bell Siphons are well-constructed and highly reviewed by Aquaponics farmers around the world. Having sold over 7000 siphons worldwide, Smoky Mountain Aquaponics is quickly becoming a trusted brand in Bell Siphon manufacturing. All gravel shields are slotted for maximum drain and maximum filtering. No-clog bell comes with cap and pull handle and is easy to assemble and install. 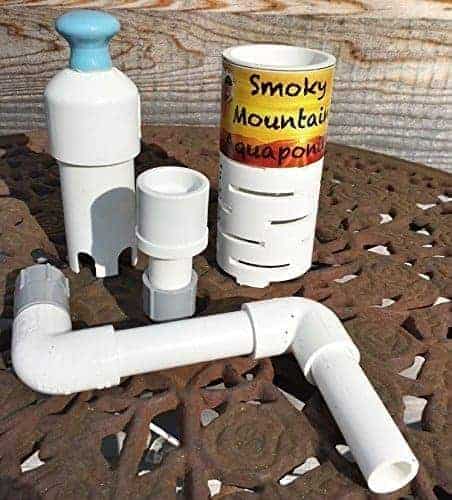 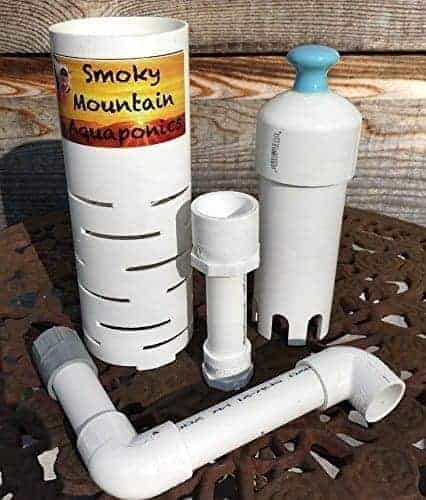 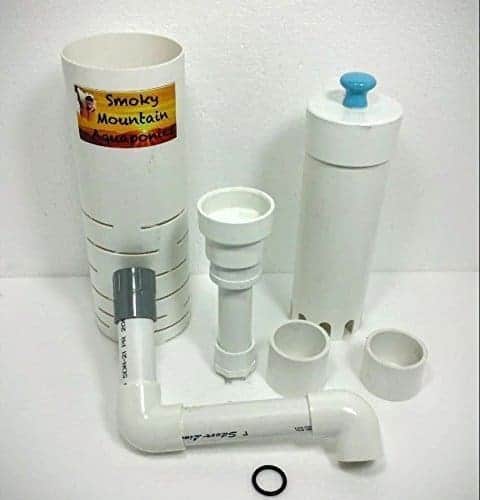 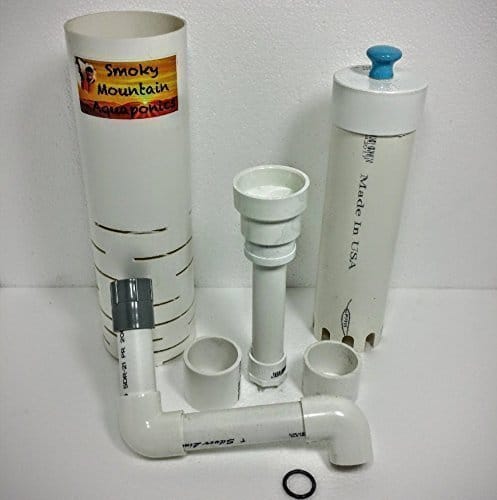 If the water pump is considered the heart of an aquaponics system, pumping nutrient-rich water to all the necessary parts, the bell siphon might be considered the lung. It uses air pressure to regulate a steady rise and fall in the water level. A well-constructed bell siphon will keep an entire system flowing properly, simply by physics.

Thank you for taking the time to read our article on the bell siphon for aquaponics. We'd love to hear your feedback in the comments section below. If you've found this article to be useful and are interested in learning more, be sure to sign up for our newsletter.

Aquaponics pH Explained: How to Maintain the Perfect Balance

Bishop, P. (2016, April). The Genius of an Aquaponics Bell Siphon. Retrieved from http://blog.stuppy.com/aquaponics/the-genius-of-a-bell-siphon