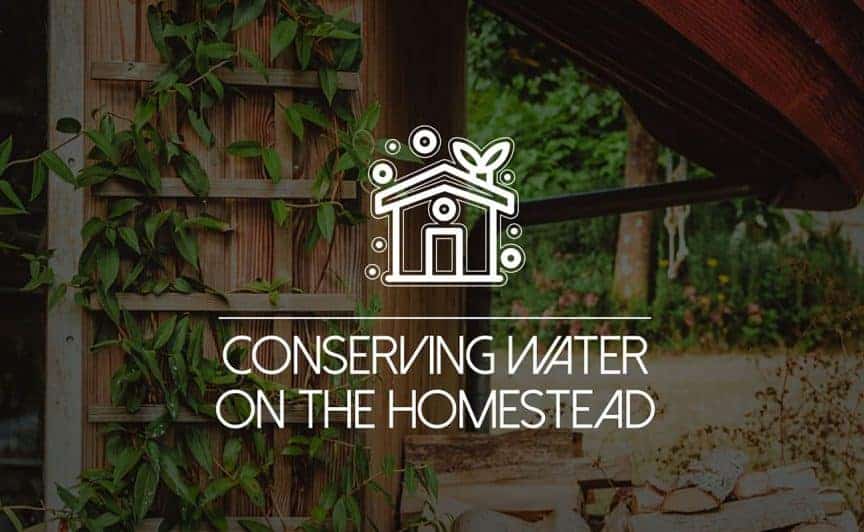 Spoiler alert: it was mostly an accident.

See, the other day I was half way through writing a lovely little post about how we fertilize our garden for free when my fingers chanced to alight upon our water bill, freshly arrived in the mail.

Puzzled about the ratio of gallons to cubic feet and months to days, I did a bit of division. Then I had a cow, as they say.

I accosted my poor husband very rudely. “We must have a leak somewhere! No way do the four of us use an average of 24.9 gallons a day!”

I tucked the children into bed while my husband the Data Fiend (DF) dug out two years of our water usage numbers, graphed it for me and then explained it to me, when he should have been using his precious evening moments to edit student grant proposals.

I did not ask him to do this but he is a data superhero, and duty called. DF’s numbers say there is no new leak, and we really do use an average of about 28 gallons a day, varying from a low of around 20 to a high just above 30. 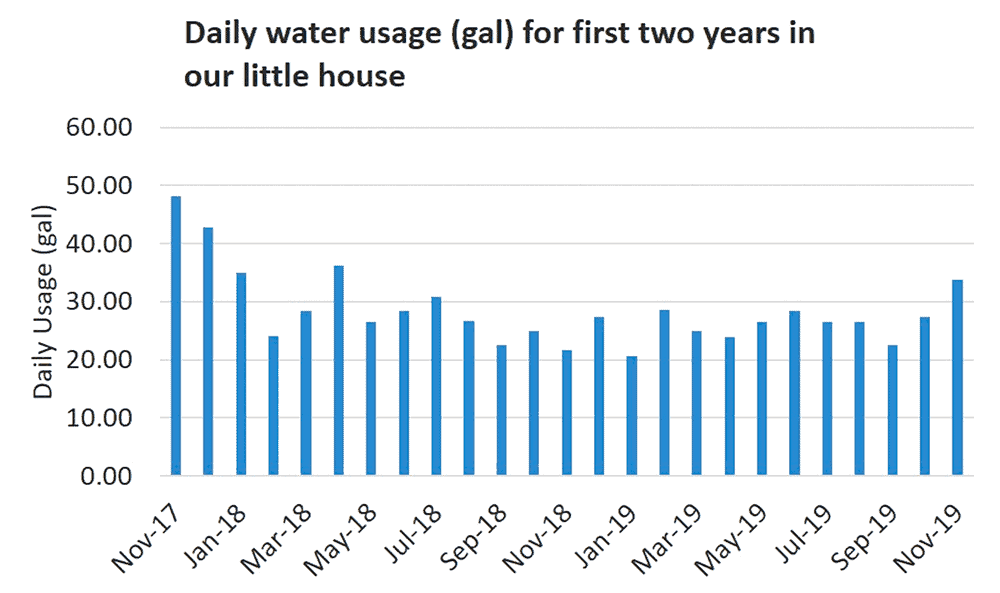 This sounded like a huge amount to me. I lived in the back of my truck in the Arizona desert for a little while, where I happily got by on about 10 gallons a week.

I can assure you that while it is not very pleasant, I can get plenty clean with about half a gallon of freezing water, standing between cacti in the brisk December wind. My lifestyle has changed greatly since then, and my mental account of my personal water use had not caught up.

To figure out where it’s all flowing I added up what my family currently uses, some of it measured and some of it guessed. I hand-wash dishes, and have measured myself to use between two and three gallons per batch, two batches per day.

Lest you think we must eat on paper and order takeout, I assure you that I cook almost every meal and also do things in the kitchen my mother says no sane cook would attempt: homemade pasta, home-fermented products, lots of canning and of course processing home-grown animals.

In winter we all shower once every other day under a low-flow shower head. This probably uses at least 20 gallons for the four of us, or 10 gallons per day. Showering every other day would have left me too stinky before I started making my own deodorant, but now it works fine.

In summer we shower every day out in the garden, where the 20-gallon solar shower tank runs dry in about three days if no one remembers to refill it, so summer showering accounts for seven or more gallons per day.

Then again we work outside in the heat, so every adult has to drink a minimum of one gallon to avoid heat exhaustion, and we usually do closer to five quarts. Together the four of us probably drink almost four gallons per day in hot weather, plus some for cooking.

We have a high-efficiency washer with which we do on average two and a half loads per week, amounting to about seven gallons per day. And no matter how much I talk about it, the children seem to think “please wash your hands” means “please recreate Lake Superior on the bathroom floor.” Don’t get me wrong, I’m thrilled they’re washing. It’ll keep us all healthier. I’m just tired of stepping in lakes.

Washing hands, brushing teeth and the tiny flush on our urine-separating compost toilet definitely uses at least two gallons. Altogether, that puts us at around 28 gallons per day for the four of us. Sheesh.

Stewing about this, I looked up the average US water usage and discovered that North Carolina households use an average of 70 gallons per day per person. If our household was average for our area we would be using 280 gallons, ten times as much as we do. And our state usage turns out to be some of the lowest in the country! In Idaho where they get far less rain, per person usage tops 150 gallons per day.

Out west, the point of conserving water is obvious. Our civilization is drawing down aquifers at a terrifying pace, and our ability to feed ourselves will be seriously damaged when they run dry. But here in the east we get 60 inches of rain per year. This past June my area had a hundred-year flood; almost a year later, the bridges in our neighborhood haven’t been fixed and the roads are still closed.

Even though we’re soggy, treating that water to drinkability and pumping it to our house does have an environmental impact, about 51 lbs of carbon dioxide equivalent per average US citizen per year according to How Bad Are Bananas by Mike Berners-Lee. If you can’t find it at your local library, that’s an affiliate link. My commission doesn’t raise your price, and it supports this site first and then The Cool Effect.

That’s about the same carbon impact as a night in a hotel, or one 10-mile round-trip commute in very bad traffic. At 1/10th the usage, my family’s yearly water carbon footprint is more like that of a single cheeseburger. Very small potatoes.

Is it Illegal to Collect Rainwater: 2021 Complete State Guide

But that’s not the end of the story. Most household water eventually goes down the drain. Treating the water after use has a carbon impact about four times greater than making it drinkable in the first place.

Conserving current water doesn’t reduce the impact of installing the septic, because that’s already happened. The only way to reduce the impact of disposing of septic-treated water is to let fewer solids go down the drain, lengthening the time between pumpings and saving both money and trouble.

DF is more conscious of water than I am, never failing to pause the shower head while he lathers. But our low usage is mostly a result of choices we made for other reasons such as frugality, resilience or doing less work.

For instance, every large structure on our land has a water catchment system so I can water trees, veggies and animals with free water that is caught close to where it’s used. That is mostly because I don’t want to dig hundreds of feet of water line or pay for irrigation water, and because I want a relatively clean source of water near the house if the utilities fail. 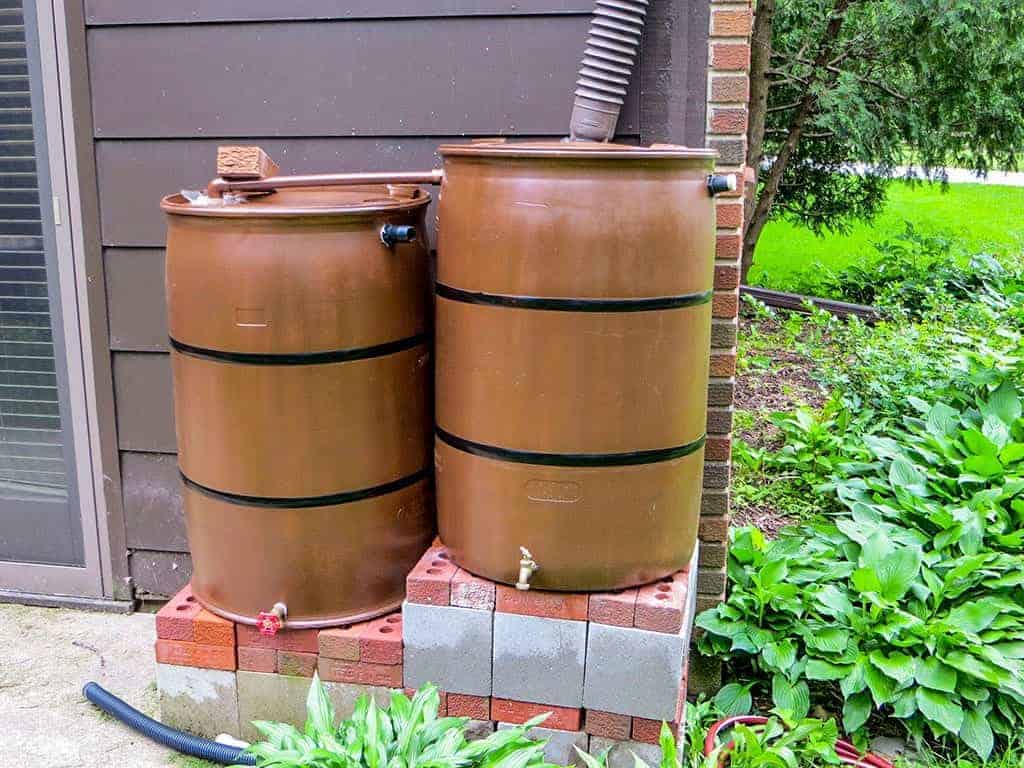 Our water bill never tops $38/month, and I like that. The catchment has a cost to set up, of course, but not as much as you'd think. I'll tell you all about it in an upcoming post.

This is an important point that I keep noticing as we endeavor to live kinder: most lifestyle changes have more than one positive effect. Our changes reinforce each other to make our lives better in many different ways.

Given our high local rainfall, our relatively small usage compared to the average and the relatively small environmental impact of treating water, I’m not going to make changes to further reduce our usage. Even though it so offended me at first!

Every household change means a trade-off, or at the very least an expenditure of mental energy. I need to focus on more impactful actions, such as our other consumer choices. But if you live in an already-arid place, reducing your water use could mean the difference between keeping your town livable for humans, or abandoning it to the desert as dry places get drier.

Even in wet areas, expensive and impactful new water treatment facilities will need to be constructed as our cities grow, unless some of us reduce. It’s easy enough to choose an efficient model when your washing machine dies, fix leaky appliances, measure your hand-washing technique against your dishwasher and go with what’s least wasteful, and let it mellow if it’s yellow (flush it down if it’s brown).

For the shower there are many techniques to reduce water usage: shorten your time or shut off while you lather (more ideas near the end of this post). Using less hot water is especially kind, because heating water accounts for 14% of average household energy usage, and the atmospheric impact of that is huge.

Using less treated water can also be an act of solidarity. Right now, 1.8 billion people lack access to adequate sanitation. A deadly virus is burning through our society and they can’t even wash their hands.

Have you looked at your water bill? Were you surprised? Did you make changes, and how have they impacted your life? Tell us below.

Thank you for taking the time to read our article on conserving water on the homestead. We'd love to hear your feedback in the comments section below. 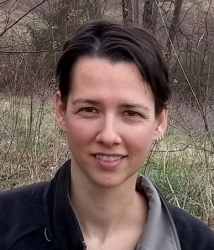 Kara Stiff
Kara Stiff holds a BS in Sustainable Agriculture from the University of Maine. She lives on 17 acres in rural North Carolina with her husband, two children and some number of goats. The Stiffs are working toward personal and community resilience with projects like natural building, small-scale food production and information sharing.